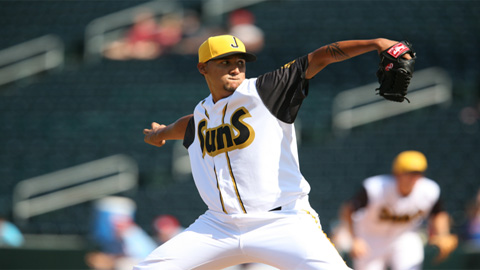 The Suns finished their season-opening series against the Stars with a 7-4 win on Monday afternoon to improve to 3-2 on the season.

The Suns began the scoring in the third inning off of Stars starter R.J. Seidel, when Paul Gran singled and pitcher Omar Poveda walked. Jeff Dominguez then hit a three-run home run into the right field seats to give Jacksonville a 3-0 lead for the second time in as many days. It was the first hit of the season for Dominguez, and the Suns second three-run blast of the year.

In the fifth inning, Jake Smolinski scratched out an infield hit and Kyle Jensen drew a walk. Smolinksi would score on a Kyle Skipworth sacrifice fly and Jensen would cross the plate on a pass ball to increase the Suns lead to 5-0. Smolinski finished the day 0-for-5 with a run scored. Jensen went 1-for-3 with a run scored.

The stars would get on the scoreboard in the sixth inning, scoring twice to cut the Jacksonville lead to 5-2. The Stars collected four hits in the inning, with Anderson De La Rosa and Lee Haydel each scoring a run. De La Rosa and Haydel combined for six of the 14 hits by the Stars in the game. Kentrail Davis, Jeff Bianchi, and Scooter Gennett had two hits apiece. Huntsville put at least one runner on base in every inning except the eighth.

The Stars drew even closer in the seventh. Hunter Davis reached base on an error and was driven in by De La Rose with an RBI single. Haydel then tripled into the right field corner to push De La Rosa across to make it a one-run game at 5-4.

But that was as close as Huntsville would get. Reliever Evan Reed entered and made sure there wouldn’t be another comeback by tossing two solid hitless innings for the Suns. Jacksonville added a run in the seventh on an Skipworth single that drove in Shawn Bowman, and another run in the eighth when Curt Smith hit a solo home run to left. It was Jacksonville’s fifth home run in five games to start the season.

The two teams combined for 24 hits in the game, and over the last two games there have been a total of 39 hits. Eight different Suns players had at least one hit in Monday’s game.

The winning pitcher was Omar Poveda. In his first start of the season he pitched five and two-thirds innings allowing 10 hits and two runs. He struck out six and walked only one. Last season Poveda struck out 116 batters in his 27 starts. Even Reed earned his first save of the year.

The Suns begin a five-game series against the Chattanooga Lookouts on Tuesday April 10th, with the first pitch scheduled for 7:05PM. Joey O’Gara looks to make his second start of the season for the Suns when they take on the Lookouts. O’Gara allowed only three hits and no runs to earn the win in the season opener against Huntsville.