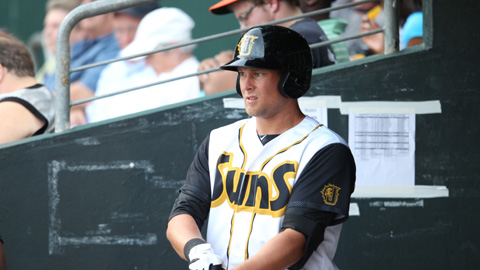 The Jacksonville Suns lost 10-5 to the Chattanooga Lookouts on Wednesday afternoon.  The Lookouts have won the first two games against the Suns scoring a total of 14 runs in their first road series of the season.  Last year Chattanooga won 41 times away from home, the most road wins of any team in the Southern League.

The Suns started quickly in the first inning when Lookouts starter Ethan Martin had trouble with his control.  He walked the bases loaded, and with Jake Smolinski, Paul Gran and Kyle Jensen aboard he issued a free pass to Curt Smith to force in the first run of the day.  Smolinski walked three times in the game.  It was Smith’s fourth run batted in this year.  Kyle Skipworth made it 2-0 with a sacrifice fly to center, with Gran scoring from third.  For Skipworth, it was his third sacrifice fly of the season.

The lead was a brief one for the Suns.  In the second inning, Lookouts catcher Matt Wallach hit a 2-run home run to right to off of Suns starter Bryan Evans and the score was tied 2-2.  It was Wallach’s first home run of the season, and the second round-tripper that the Suns have surrendered in the first seven games.

In the home half of the fifth, the Suns regained the lead when pitcher Bobby Bramhall singled and eventually moved around to third after a double play.  With two outs, Bramhall scored on a wild pitch by Jon Michael Redding to put the Suns ahead 3-2.

Chattanooga had an answer in the seventh inning, when Louis Nunez doubled to left off Kyle Kaminska driving in a pair of runs to give the Lookouts a 4-3 lead.  Nunez finished the day 2-for-2 with for runs batted in.

The Lookouts took command of the game in the eighth inning when they collected seven hits and scored six runs to increase their lead to 10-3.  Chattanooga batted around in the inning, with five different players driving in at least one run.  The Lookouts finished the day 6-for-13 with runners in scoring position.

Louis Nunez, Pedro Baez, and Matt Wallach each had two hits for the Lookouts.  Donnie Webb went 2-for-2 for Jacksonville.  Paul Gran went 1-for-2 and scored a pair of runs.

Kyle Jensen hit his first home run of the season in the eighth for Jacksonville to make it 10-5 but that’s as close as the Suns would get.  Bryan Evans pitched three and a third innings and allowed two runs on three hits.  Bobby Bramhill tossed two and two-thirds innings without allowing a hit.  Kyle Kaminska was the losing pitcher, giving up six runs on six hits in one and a third innings.  Suns pitchers combined for 10 strikeouts in the game and have now fanned 24 batters in the last two games.  Jon Michael Redding went two innings to pick up his first win of the season for the Lookouts.

The middle game of the series is Thursday night with the first pitch scheduled for 7:35PM.