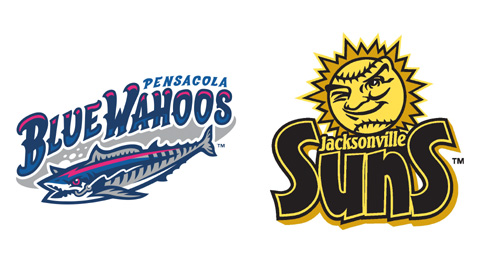 Suns blank the Blue Wahoos for their second shutout of the season. Photo Courtesy: Jacksonville Suns

The Jacksonville Suns shutout the Blue Wahoos 7-0 in a rain-shortened game on Tuesday to win their second straight in Pensacola.
Zack Neal started his second game for Jacksonville and once again turned in a solid performance to earn his first win a of the season, and he did it with rain falling throughout the night.  Neal pitched seven innings and scattered six hits without allowing a run.  He struck out seven and walked only one.  In his two starts this season he has allowed only one run in 13 innings.  Kyle Kaminska sat down the Wahoos in order in the eighth just before the heavy rain started to fall.  The game was called at 10:15PM local time after eight innings.
In the first three games of the series the Blue Wahoos have scored only six runs, and they haven’t crossed the plate since the first inning of the second game of the series, a stretch of 20 innings without a run.  In the last 18 innings, Suns pitchers have allowed only nine hits while striking out 18 and walking just six.
Shawn Bowman led the way at the plate collecting three of the Jacksonville’s five hits.  Bowman was 3-for-4 and drove in four runs, including hitting a solo home run in the seventh inning.  It was his second home run in as many days, and the tenth this season for the Suns.  Bowman is the only player to hit more than one home run so far.  Chris Gutierrez, Ryan Patterson, and Jaime Ortiz each drove in a run.  Seven different players scored for Jacksonville in the team’s most lopsided with of the season.  The Suns are 6-1 this season when they score the game’s first run.
Pensacola pitchers walked seven Jacksonville hitters in the game, including three to start off an inning.  Kyle Jensen, Jake Jefferies, and Chris Gutierrez all earned leadoff walks and all three came around to score later in those innings.  Through 13 games this season Suns batters have been issued 55 bases on balls, and 11 of them have scored.
Zach Neal was the winning pitcher, he’s now 1-1.  Blue Wahoos hitters were 0-for-5 with runners in scoring position.  The losing pitcher was Daniel Corcino, he’s now 0-1.  Corcino is listed as having the best fastball in the Cincinnati Reds organization.  Jacksonville improves to 6-7 with the win, and one game behind Pensacola for second place in the South Division.
Game four of the series is Wednesday at Maritime Park, weather permitting.  Left-hander Graham Taylor takes the hill for the Suns looking to extend the team’s winning streak to a season-high three games.  Righty Tim Crabbe is scheduled to be on the mound for the Blue Wahoos.  Pensacola has lost two straight at home after winning four of their first five games in the new ballpark