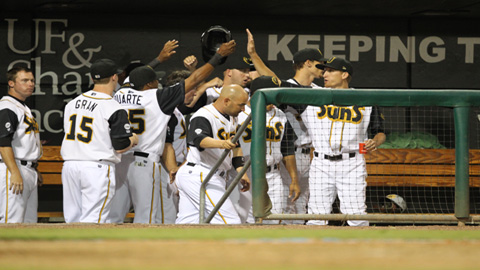 Dallas Poulk singled in the bottom of the ninth inning to drive in Donnie Webb and give the Suns a walk-off win over the Blue Wahoos. Photo Courtesy: Jacksonville Suns

The Suns returned to Jacksonville after winning seven games on their 10-game road trip and picked up right where they left off, downing Pensacola 6-5 at the Baseball Grounds.

Kyle Skipworth put the Suns in front 1-0 in the second inning with a solo home run off of Blue Wahoos starter Pedro Villarreal.  Skipworth has hit three of his four round-trippers this season against Pensacola.  Curt Smith walked later in the inning and scored when Ryan Patterson doubled to left field to increase the lead to 2-0.  On a wild play, Jose Alvarez hit a ball back to the pitcher with Donnie Webb on first.  It bounced off of Villarreal, and started a double play in which Webb and Alvarez were both tagged out on a base running miscue.  Patterson scored from second on the play to make it 3-0.

In the fourth inning, Kyle Jensen singled with one out and scored on Patterson’s second double of the night for a 4-0 Suns lead.  A batter later it was 5-0 when Donnie Webb hit his second triple of the season to drive in Patterson.  It was Webb’s third run batted in of the season.  Patterson has now driven in six runs on the year.

Suns starting pitcher Jose Alvarez was cruising along into the sixth inning.  He had retired 15 straight Pensacola batters after Ryan LaMarre doubled to lead off the game.  But in the sixth, the Blue Wahoos were able to get to Alvarez when Brian Peacock led off with a single, and that was followed by a double by Yordanys Perez.  A sacrifice fly by LaMarre plated the first of four runs in the inning for the Blue Wahoos and what was a comfortable Suns lead was gone with the score 5-4.  Didi Gregorius had a single to drive in a run in the inning, and Henry Rodriguez drove in his 12th run of the season with a double.  Gregorius has hit safely in 11 of his last 12 games.

After Garrett Parcell pitched the eighth inning for the Suns, Evan Reed took over in the ninth inning for Jacksonville looking to secure the win for his sixth save of the season.  The leadoff man in the inning Cody Puckett popped up into shallow right field and second baseman Dallas Poulk dropped the ball and Puckett ended up on second.  It was the Suns third error of the game and a costly one.  Two batters later Brian Peacock drove in the game-tying run with a single to even the score 5-5.

In the home half of the ninth, Donnie Webb led off against relief pitcher Justin Freeman with his second triple of the night.  After an intentional walk to pinch hitter Paul Gran, Pensacola manager Jim Riggleman brought his center fielder into the infield to give the Blue Wahoos five players in the infield with the game-winning run at third for the Suns with no outs.

What happened next was a moment that could have been taken right from a Hollywood script.  Dallas Poulk, who had committed that error earlier, came to the plate with a chance to give the Suns the win.  He didn’t disappoint.  After falling behind in the count no balls and two strikes, Poulk launched a single into center field to give Jacksonville the walk-off win 6-5.  It was one of those moments that can be frozen in time for a player in just his third game with his new team.  It was just the third run that the Suns have scored in the ninth inning in 21 games this season.

Jose Alvarez pitched five-and-a-third innings, allowing four runs on five hits and didn’t figure in the decision.  He struck out six and didn’t walk a batter.  Evan Reed allowed one hit and one unearned run in the ninth to earn his first win of the season.  The losing pitcher was Justin Freeman.  He entered the game having allowed only two runs this season, but he allowed the game winning run on two hits on Wednesday to fall to 2-2 on the season.

Donnie Webb had a perfect night going 3-for-3 with two triples, a run batted in, and a run scored.  Overall this year, the Suns have hit five triples, and Webb has hit all three of his against Pensacola.  Ryan Patterson also had a big night at the plate going 2-for-4 with two doubles, two runs batted in, and two runs scored.  Kyle Jensen finished 2-for-4 and scored a run.

The Suns have won five straight over the Blue Wahoos after dropping the first-ever meeting against their new in-state rival.  Five of the first six meetings this season between the two teams have been decided by a single run, with Jacksonville winning four of them.  Jacksonville improved to 10-1 when scoring the game’s first run.  The Suns have won eight of their last 11 games, while the Blue Wahoos have just three wins in their last 11 contests.

The win, combined with Mobile’s 8-7 loss to Chattanooga in 12 innings, leaves the Suns alone atop the Southern League South Division.   With 12 wins in the month, Jacksonville already has more wins in April then in the 2011, when they finished 11-12 in the first month of the season.  Game two of the series against Pensacola is Thursday at the Baseball Grounds of Jacksonville.  In a matchup of right-handers, Bryan Evans takes the mound for the Suns looking for his first win of the season.  Tim Gustafson gets the call for the Blue Wahoos.