Blue Wahoos Cruise Past The Suns 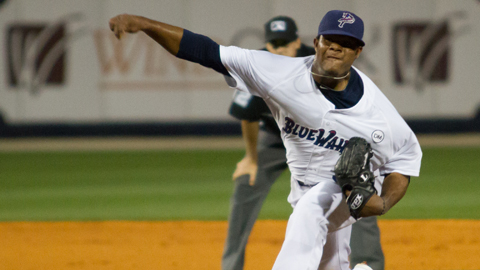 The Pensacola Blue Wahoos downed the Jacksonville Suns for the second straight game with an 8-2 win on Friday night at the Baseball Grounds.

For the second time in as many nights Henry Rodriguez and Joel Guzman led the Blue Wahoos at the plate.  After combining for eight hits the previous night, the duo were at it again in this one.  Rodriguez led off the fourth inning with a single, and Guzman followed by hitting his third home run of the season to give the visitors a 2-0 lead for a second straight night.  It was just the second home run that Zach Neal has surrendered this year in his four starts.  The Suns dropped to 1-10 when they allow their opponent to score first, while the Wahoos are now 9-4 when they score the first run.

In the fifth inning, Ryan LaMarre doubled to left and came in to score Pensacola’s third run on a single by Rodriguez.  LaMarre finished the night 2-for-4, scored two runs, and drove in another.

The Blue Wahoos sent 11 hitters to the plate and exploded for five runs in the top of the seventh against reliever Garrett Parcell and built an 8-0 lead.  Yordanys Perez drove in two runs in the inning with one of the Blue Wahoos five doubles in the game.  Ryan LaMarre, Josh Fellhauer, and Miguel Rojas also each drove in a run in the inning.  Six straight Pensacola batters reached base in the seventh, including a pair of intentional walks.

The Suns scored their first run of the night in the seventh, when Kyle Jensen walked to lead off the inning, and scored when Donnie Webb doubled.  Webb was thrown out on a close play at third.  Jensen also hit his third home run of the season in the ninth inning.

Seven players had two hits for Pensacola as the Blue Wahoos hammered out 14 hits in the game.  Yordanys Perez and Joel Guzman each drove in two runs on the night.  In the first three games of the series, the Wahoos have scored 22 runs on 36 hits.  After having just one extra base hit and 11 singles in the second game of the series, Pensacola had five doubles and a home run in Friday’s game.

Jensen was 1-for-3 with two runs scored and he also drove in a run.  Donnie Webb was 2-for-4 with a run batted in.  Webb is 5-for-11 in the last three games.  Daniel Corcino allowed just three hits in five and a-third innings to even his record at 2-2.  Zach Neal allowed 10 hits and three runs in his six innings of work and is now 2-2 on the season.