BayBears Pitching Shuts Down The Suns 2-1

BayBears starter Tyler Skaggs won his first game of the season striking out seven over seven innings against the Suns in a 2-1 win at the Baseball Grounds of Jacksonville. Photo Courtesy: Mobile BayBears

By Steve Kolbe
The Mobile BayBears edged the Jacksonville Suns 2-1 on Monday afternoon to increase their lead in the Southern League South Division to two games.
Starting pitching has been the story of the series so far for Mobile.  The Suns managed just one hit against Sunday’s starter Trevor Bauer, and on Monday Tyler Skaggs allowed only five.  In 14 innings the two BayBears starters have not allowed an earned run to the Suns.
Mobile took a 1-0 lead in the third inning on Monday against Jacksonville starter Bryan Evans.  With two outs, Tyler Skaggs doubled to left and Archie Gilbert drove him in with a double of his own.  Skaggs is one of the better hitting pitchers in the league and is now 4-for-8 at the plate this season.  The BayBears are 17-5 when scoring the game’s first run, while the Suns are 3-14 while they allow the first run.
The Suns scored their only run of the game in the fifth inning against Skaggs.  Curt Smith led off the inning when he reached on an error by third baseman Matt Davidson.  After a double by Ryan Patterson gave the Suns runners on second and third with no one out, Skaggs settled down to get Taylor Krick and Chris Gutierrez on ground outs with the runners stuck in scoring position.  Pinch hitter Donnie Webb struck out which should have ended the inning, but Mobile catcher Rossmel Perez couldn’t hang on to the ball.  Instead of throwing the ball to first to record the final out of the inning, Perez threw to third with Smith coming in to score on the strikeout to tie the game 1-1.  The BayBears committed two errors in the inning, increasing their league leading total to 43.  Last season Mobile committed only 98 errors, fewest in the Southern League.
In the eighth, Archie Gilbert walked to lead off the inning and later scored on Brent Clevlen’s sacrifice fly to give the BayBears a 2-1 lead and that was the game winning run.
Ryan Patterson finished the game 2-for-4 and his double in the fifth inning was the only extra base hit for the Suns on the day.  Jake Smolinski, Paul Gran, Chris Gutierrez, and Kyle Skipworth each had a single in the game.  Jacksonville has a total of nine hits in the first two games of the series.
For the BayBears, Archie Gilbert finished 2-for-3 and walked twice.  He drove in a run and scored the game-winning run.  Four of the BayBears seven hits in the game were doubles.  The two teams combined to go 3-for-18 with runners in scoring position, and stranded 15 runners on base Monday afternoon.
Tyler Skaggs threw 94 pitches to earn his first win of the season striking out seven and walking just one.  He pitched seven innings and scattered five hits and did not allow an earned run.  Evan Marshall pitched the ninth for his fifth save of the season.  Suns starter Bryan Evans pitched five innings, allowing one run on four hits and didn’t figure in the decision.  Josh Schmidt (1-1) pitched the eighth and ninth innings, allowing two hits and one run and lost for the first time this season.
The BayBears have won eight of their last 11 games while the Suns have dropped four of their last five.  Game three of the series is Tuesday night at the Baseball Grounds of Jacksonville with the first pitch scheduled for 7:05PM.  Zach Neal (2-3, 3.41) takes the mound for the Suns.  He allowed five runs on seven hits in his last start.  Derek Eitel (2-2, 3.86) will start for the BayBears. 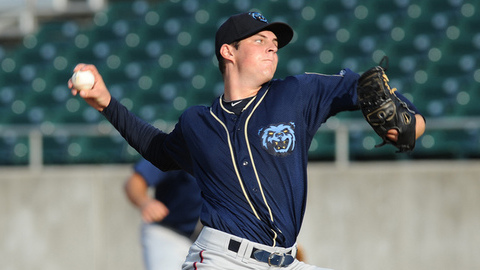 Mobile BayBears starter Trevor Bauer allowed just one hit in seven innings against the Suns to improve to a league-leading 6-1 on the season. Photo Courtesy: Mobile BayBears

When the night began, the Jacksonville Suns and Mobile BayBears were tied for the top spot in the South Division with identical 17-13 records.  By the end of the night, the BayBears had hit their way to an 11-0 win and handed the Suns their worst loss of the season.  The game was called in the eighth inning due to heavy rain and lightning.

A day after scoring 11 runs on 11 hits in the series finale in Birmingham, the Suns managed only one hit off of Mobile starter Trevor Bauer.  Jake Smolinski’s leadoff single in the first inning was the only hit surrendered by Bauer in the game.

Mobile took the lead for good in the fourth inning when Matt Davidson doubled for the first hit against Suns starter Jose Alvarez.  After a Brent Clevlen walk the stage was set for Marc Krauss.  He jumped on the first pitch that he saw from Alvarez and hit a three-run home run into the right field stands to put the BayBears in front 3-0.  Krauss now has five home runs and 22 runs batted in this season.  He has collected 14 hits in his last 11 games.  Mobile improved to 16-5 when scoring the game’s first run, while the Suns dropped to 3-13 when they allow their opponent to strike first.

In the sixth, Matt Davidson led off the inning with a walk and Clevlen followed with a single to put two on with no outs.  Marc Krauss drove in Davidson with a single, and Clevlen scored on a fielder’s choice to increase the BayBears lead to 5-0.

Mobile sent 10 men to the plate in the seventh inning against Suns reliever Wade Korpi.  Three straight singles by Archie Gilbert, David Nick, and Matt Davidson started the rally with Gilbert scoring the first run of the inning to push the lead to 6-0.  After scoring two runs earlier in the game, Clevlen drove in Mobile’s seventh run with a sacrifice fly to left and it was 7-0.  Later in the inning, Ed Easley drove in Davidson with a single to center and the lead was 8-0.  The BayBears scored three more runs in the inning when Yazy Arbelo doubled to drive in a pair, and Wladimir Sutel singled to drive in Arbelo to make it 11-0.  The BayBears scored six runs on six hits in the inning.  It was the second time this season that the Suns allowed six runs in an inning, with the last coming in a 10-5 loss at home to Chattagnooga April 11th.

Trevor Bauer, the Arizona Diamondbacks first round pick in 2011, one-hit the Suns over his seven innings of work to improve his record to 6-1.  He leads the league in wins and is among the leaders in earned run average.  In his two starts against the Suns this season, Bauer has allowed only 5 hits in 14 innings.  Jose Alvarez pitched five and a-third innings allowing five runs on five hits and falls to 1-1 on the season.  Wade Korpi pitched one and a-third innings, giving up six runs on six hits.  Chris Squires also pitched and inning and a-third allowing one hit before the game was stopped.

Game two of the series is Monday morning at 11:00AM at the Baseball Grounds with the Suns looking to even the series.  Bryan Evans (0-2, 5.26) will take the mound for Jacksonville against Mobile’s Tyler Skaggs (0-2, 3.91).