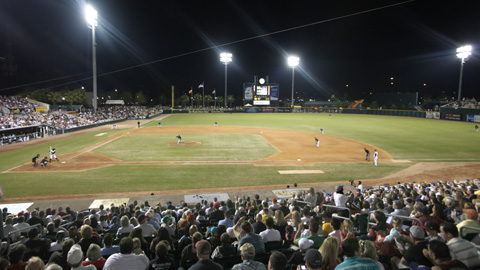 The Jacksonville Suns used the long ball to defeat the Pensacola Blue Wahoos in the first game of their series 8-5 at the Baseball Grounds on Thursday night.

After a 44 minute rain delay, the Suns jumped out to a 1-0 lead in the first inning against Pensacola starter J.C. Sulbaran, when Jeff Dominguez singled and scored on a Kyle Skipworth grounder that went under the glove of Blue Wahoos second baseman Brodie Greene.  The Suns have scored at least one run in the first inning 12 times in 41 games this season, and have a record of 10-2 when they cross the plate in the first inning.

Jacksonville increased the lead to 2-0 in the second, when Kyle Jensen led off with a walk and scored on a one-out double by Chris Gutierrez.  It was the first of two doubles and two runs batted in for Gutierrez, who now has eight doubles this season.

The Blue Wahoos figured out starter Jose Alvarez in the third inning, collecting four hits and scoring two runs to tie the game 2-2.  With one out, Didi Gregorius doubled and Brodie Greene singled to put runners on first and third.  Joel Guzman and Koyie Hill each drove in a run with and RBI single.

Pensacola added two more runs in the fourth against Alvarez when P.J. Phillips led off the inning with a single, and Andrew Means then doubled to center with Phillips motoring around to increase the Blue Wahoos lead to 3-2.  Means would later score on a sacrifice bunt by Ryan LaMarre, and Pensacola had a 4-2 advantage.

For the second straight game the Suns would rally from two runs down for a win.  In the bottom of the fourth, Kyle Jensen doubled to lead off the inning and scored on a sacrifice fly by Gutierrez to trim the Blue Wahoos lead to 4-3.

In the fifth inning, Jacksonville took the lead back when Jeff Dominguez and Jake Smolinski walked to start the inning.  Kyle Skipworth drove in Dominguez with a ground out, and Ryan Patterson plated Smolinski with a double down the right field line and the Suns were ahead 5-4.

The score stayed that way until the ninth, with Evan Reed trying to preserve the win.  With one out, Didi Gregorius singled and stole second base.  Reed retired Brodie Greene on a fly out to center, but with two outs Joel Guzman jumped on a 2-0 pitch and doubled to left to drive in Gregorius and tie the game 5-5.

The Blue Wahoos turned the game over to Curtis Partch for the bottom of the ninth.  Jake Smolinski led off with a double, and then Skipworth was walked intentionally.  Shawn Bowman ended the game with a walk-off three-run home run that sailed into the flag court in left field to give the Suns an 8-5 win.  The Suns have now hit a home run in five of the last six games.

Chris Gutierrez finished the game 2-for-3 with two runs batted in.  It was his fifth multi-hit game of the year.  Kyle Skipworth drove in two runs to increase his RBI total to 17.  The Suns finished with 10 hits in the game, reaching double-digits in hits for the first time in 13 games.  Seven of the 10 hits were for extra bases, with six doubles and a home run.

Suns starter Jose Alvarez pitched six innings in his seventh start of the season.  He allowed seven hits and four runs, while striking out five and walking just one.  Blue Wahoos starter J.C. Sulbaran pitched four innings and allowed four hits and five runs.  Evan Reed pitched two innings for the Suns earning the win and is now 2-1 this season.  He allowed three hits, struck out three, and gave up the game tying run in the ninth.  Curtis Partch didn’t record an out in the ninth and fell to 2-3 on the season.