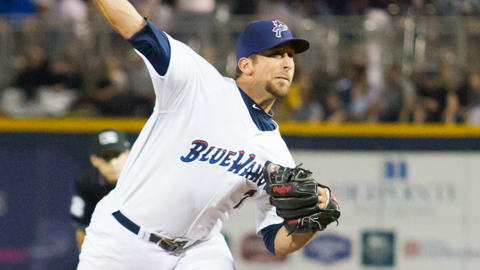 Blue Wahoos pitcher Tim Gustafson won his first game since being moved into the starting rotation. He allowed just two hits and one run against the Suns to impove to 2-0 on the season. Photo Courtesy: Pensacola Blue Wahoos

The Jacksonville Suns fell to the Pensacola Blue Wahoos 2-1 on Friday night at the Baseball Grounds.  The Suns had their three game winning streak against their division rival come to an end.  Jacksonville is now 8-4 against the Blue Wahoos this season, with six of the games between the two teams decided by a single run.

After waiting out the second rain delay of the series, this one only 25 minutes, Pensacola took the lead in the second inning against Suns starter Bryan Evans with three straight hits.  Mark Fleury started the inning with an infield single back to the pitcher, and David Vidal singled to center behind him to put runners on first and second with one out.  Yordanys Perez swung at the first pitch he saw from Evans, and singled to right field to drive in Fleury and put the Blue Wahoos in front 1-0.

In the bottom of the second inning the Suns tied the game 1-1 with one swing of the bat, when Shawn Bowman hit his fifth home run of the season off of Blue Wahoos starting pitcher Tim Gustafson.  Bowman has hit two home runs in as many nights, and is tied with Kyle Skipworth and Kyle Jensen for the team lead with five round trippers.  The Suns have hit a home run in three straight games and six of their last seven.  It was the Suns 25 home run of the season, with 16 of them solo shots.

The Blue Wahoos took a 2-1 lead in the fourth, when former Sun Joel Guzman singled to lead off the inning and then stole his first base of the season.  Bryan Evans then struck out both Mark Fleury and David Vidal, but Yordanys Perez delivered a two-out single hitting a 0-2 pitch into center field with Guzman scoring the game’s final run.

Bryan Evans gave the Suns a solid outing but dropped to 0-3 on the season.  Evans worked a season-high seven innings allowing six hits and two runs.  His previous high was five and a-third innings.  Evans tied his season high by striking out seven, and didn’t walk a batter for the second straight outing.  All six hits against Evans were singles.  Josh Schmidt and A.J. Ramos each pitched an inning in the game for the Suns.

Tim Gustafson put together his second-longest outing of the season as he improved his record to 2-0.  He pitched five and two-thirds innings before handing the game over to the Blue Wahoos bullpen.  Gustafson earned his first win since April 8th.  It’s also his first win in five starts since being moved from the bullpen into the starting rotation.  Leadoff batters hit just .196 against Gustafson last season, and the Suns had their leadoff hitter reach base only once in the game against him on Friday.

After using seven pitchers in game one of the series, manager Jim Riggleman called his bullpen three times on Friday.  Clayton Tanner, Justin Freeman, and Donnie Joseph combined to pitch three and a-third innings allowing just two hits.  Joseph closed out the game to earn his eighth save of the season.  He’s now tied for the league lead in saves with Jacksonville’s Evan Reed and Huntsville’s Robert Wooten.

Shawn Bowman went 2-for-4 in the game and he was one of just three Suns players with a hit.  Jeff Dominguez and Curt Smith each singled on the night.  Yordanys Perez and Joel Guzman each had two hits for the Blue Wahoos, with Perez driving in both runs for Pensacola.

The Suns fell to 3-20 when allowing their opponent to score the first run of the game and saw their modest two-game winning streak come to an end.  The Blue Wahoos and Suns are once again tied in the standings with identical 20-22 records.   Jacksonville went 10-5 against division opponents in April with seven of those wins coming at the expense of Pensacola.  In May, the Suns are just 3-9 against teams from the South Division and have been outscored 49-27 in those 12 games.