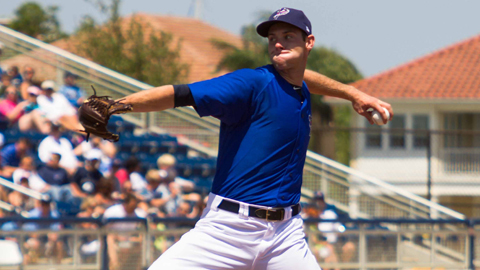 The Blue Wahoos scored the game-winning run with two outs in the 11th inning for a 3-2 victory over the Jacksonville Suns June 4, 2012 at Bayfront Stadium. Photo Courtesy: Pensacola Blue Wahoos

Blue Wahoos first baseman Joel Guzman’s only hit of the night propelled Pensacola to a 3-2 walk-off win over the Jacksonville Suns in eleven innings on Monday at Bayfront Stadium.
The Blue Wahoos took an early lead in the first inning with two unearned runs against Suns starter Bryan Evans.  Ryan LaMarre led off the inning with a double down the left field line, and Didi Gregorius singled with LaMarre taking third on the play.  Brodie Green then sent a fly ball to Donnie Webb, but the throw to the plate from the Suns center fielder bounced into the Jacksonville dugout with both LaMarre and Gregorius scoring on the error to put Pensacola in front 2-0.  The Suns are now 6-26 when allowing the first run of the game.
The Suns tied the game in the fourth inning against Pensacola starting pitcher Kyle Lotzkar.  Paul Gran was hit between the numbers by Lotzkar to begin the inning.  It was the eleventh time this season that Gran has been hit by a pitch.  Suns first baseman German Duran continued his hot streak on the first pitch that he saw in the inning, hitting his third home run of the season over the left field fence to even the score 2-2.  Duran is 5-for-11 with two home runs, five runs batted in, and five runs scored in the first three games of the series.  The Suns have hit a home run in 12 of the their last 20 games, with the last two coming off the bat of Duran.
The game remained tied until the home half of the eleventh.  Suns reliever Corey Madden struck out Ryan LaMarre to start the inning, but then allowed a single to Didi Gregorius.  Brodie Green popped out to right field for the second out of the inning, and then the drama began.  Joel Guzman promptly ended the game by smashing a two-out single up the middle, with Gregorius scoring the game winning run.  The jubilation began as the Blue Wahoos exploded from their dugout and chased Guzman all over the field.  Before his extra inning walk-off hit, Guzman was 1-for-14 in the series.
The Suns are 2-2 in extra-inning games this season, with all four of the games played on the road.  The Blue Wahoos are 4-3 when working overtime.  Six of the eight games played between the Suns and Blue Wahoos at Pensacola’s Bayfront Stadium have been decided by a single run.
Jeff Dominguez finished 2-for-5 and was the only Suns player with more than one hit.  For the Blue Wahoos, Josh Fellhauer went 4-for-5 with four singles.  Didi Gregorius was 3-for-5 and scored two runs on the night.
Both starting pitchers didn’t figure in the decision.  Bryan Evans allowed two unearned runs on six hits over six innings for the Suns.  Evans struck out five and did not walk a batter.  Kyle Lotzkar allowed two runs on seven hits in his seven innings of work, and struck out a season-high 10 batters.  Corey Madden (1-1) allowed four hits in his two and two-thirds innings, and surrendered the game-winning run.  Blue Wahoos relievers Curtis Partch and Justin Freeman combined to pitch four innings of one-hit ball.  Freeman (3-5) pitched the eleventh inning to earn the win.  Suns batters struck out 16 times, one shy of their season-high.
The Suns had won four straight games on the road before Monday’s loss.  Jacksonville is 27-31 on the season and five games behind Mobile in the South Division.  The Suns haven’t won more than two games in a row since a four-game win streak April 28 to May 2.

Game four of the series is Tuesday with the first pitch scheduled for 8:00 p.m. EST.  For the Suns, LHP Graham Taylor (3-4, 4.41) will take the mound.  In his last start, Taylor allowed two runs on six hits in a win over Mobile.  The Blue Wahoos will look to even the series with RHP Daniel Corcino (2-3, 3.79) on the hill.