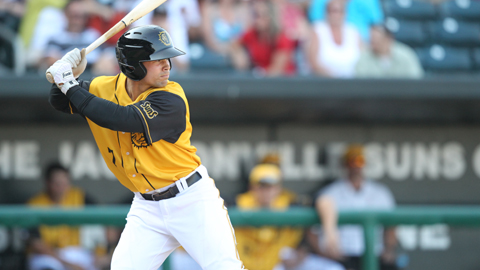 The Suns avoided a sweep with a 4-2 win over the Montgomery Biscuits on Friday night at the Baseball Grounds of Jacksonville.  The win snapped the Suns four-game home losing streak.
The Suns scored four unearned runs in the second inning against Biscuits starter Kyle Lobstein.  After Curt Smith and Kyle Jensen singled, second baseman Tyler Bortnick misplayed a ground ball by Jeff Dominguez with Smith scoring all the way from second base on the error to put the Suns ahead 1-0.  Jose Duarte followed with a double down into the right field corner, with Jensen scoring on the play to increase the lead to 2-0.  Duarte has two RBI’s in his last four games in the starting lineup.  Jake Smolinski added to the lead when he singled up the middle for two RBI’s to give the Suns a 4-0 advantage.
The Biscuits scored a run in the third when Ty Morrison grounded out with the bases loaded to make the score 4-1.  Montgomery added another run on a solo home run from catcher Mayo Acosta in the seventh inning.
Jake Smolinski went 3-for-4 with two RBI’s to lead the Suns at the plate.  Hak-Ju Lee was the only Biscuits player with more than one hit.  With his two singles, Lee has now reached base safely in 27 straight games.
The Suns had 19 hits in the three game series, 16 singles and three doubles.
Jacksonville manager Andy Barkett was ejected in the first inning for after Biscuits center fielder Ty Morrison appeared to trap a ball hit by Chris Gutierrez, who was initially called safe at second base.  After a discussion between the three umpires, the call was reversed and they ruled Gutierrez out, with Barkett erupting.  After he was ejected, Barkett went to home plate and covered it with dirt.  It’s the fourth time this season that Barkett has been thrown out.
James Leverton (1-0) allowed one run on four hits in five and a-third innings for his first win with the Suns.  A.J. Ramos pitched the final two innings to earn his tenth save of the season.  Ramos has a save in each of the Suns last four victories.  Kyle Lobstein (4-5) allowed eight hits and no earned runs in the loss.
The Suns begin a four game set in Pensacola on Saturday night with the first pitch slated for 7:30 p.m.  It’s the final meeting of the season between the two teams, with the Suns needing one win to clinch the season series.  The Suns are 13-10 against the Blue Wahoos.