Braves Rally In Ninth For Win Over Suns 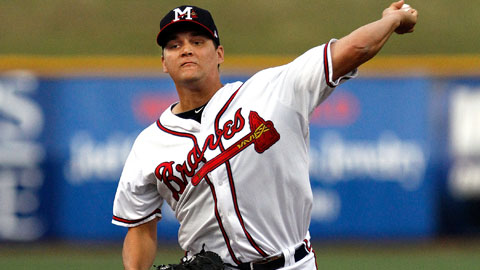 The Braves scored five runs in the ninth inning against Suns closer A.J. Ramos for an 8-5 win at the Baseball Grounds of Jacksonville July 20, 2012. Photo Courtesy: Mississippi Braves

The Suns took a 2-0 lead in the home half of the fifth, when Donnie Webb hit a two-run home run to right field off of Braves starter J.R. Graham.  It was Webb’s first home run since June 23rd and his sixth round tripper of the season.

Mississippi scored three runs on three hits in the seventh inning against Suns starter Bryan Evans to take a 3-2 advantage.  Todd Cunningham drove two of the runs with a double off of reliever Jordan Conley.  In the home half of the seventh, the Suns loaded the bases when Kyle Jensen and Danny Pertusati walked, and Jeff Dominguez singled.  Donnie Webb then doubled in the gap in right-center to clear the bases and put the Suns in front 5-3.

A.J. Ramos entered the game for the ninth, and for just the third time this season was unable to lock down the win.  The Braves took advantage of three walks, and a pair RBI singles by Christian Bethancourt and Joe Terdoslavich to tie the game 5-5.  With the bases loaded and two outs, Keenan Wiley hit a ball to center field that glanced of off Donnie Webb’s glove while he was attempting to make the catch, with three runs crossing the plate to give the Braves an 8-5 win.

Only three Suns players had hits in the game.  Donnie Webb went 2-for-5 and drove in all five runs.  It’s the second-most runs batted in for a Suns player in a game this season (Kyle Skipworth drove in six at Chattanooga May 26th).  Jeff Dominguez had three singles, and Chris Gutierrez singled to increase his hitting streak to 15 games.  Christian Bethancourt, Joe Terdoslavich, and Jason Christian each collected two hits for the Braves.

Starter Bryan Evans allowed three runs on six hits over six and a-third innings in a no decision.  A.J. Ramos (3-1) allowed five runs (2 ER) on two hits in the ninth inning and lost for the first time this season.  All three batters he walked in the inning came around to score.  Cory Rasmus (2-3) allowed just one hit over two innings to earn the win.

The Suns missed out on a chance to get back to the .500 mark for the first time since June 28, when they were 4-4.  Playing at home hasn’t been an advantage lately for the Suns, with just two wins in their last seven games at the Baseball Grounds.