Suns Even Series With BayBears 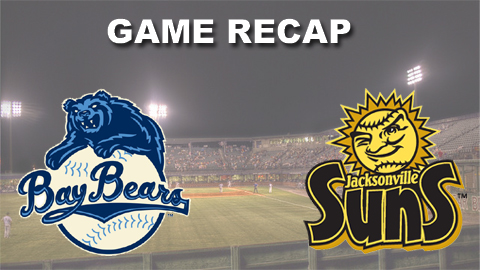 The Jacksonville Suns evened their series with the Mobile BayBears at two wins apiece, with a 9-1 win Wednesday night at Hank Aaron Stadium.   The win, combined with Pensacola dropping both games of a doubleheader to Tennessee, has the Suns tied with the Blue Wahoos for second place in the South Division.
The Suns took the lead in the top of the second inning against BayBears starter Chase Anderson.  Kyle Skipworth and Kyle Jensen were both hit by a pitch to put runners on first and second with no outs.  Jensen was hit on the hand and would later leave the game with Donnie Webb taking his place in the outfield.  With one out in the inning, Danny Pertusati hit his second home run in as many nights to put the Suns up 3-0.  The Suns improved to 41-18 when scoring the first run of the game.  Jacksonville has outscored opponents 114-77 in the first two innings this season.
The long ball continued to play a roll for the Suns in the fourth inning, when Kyle Skipworth belted his 14th home run of the season to increase the lead to 4-0.  The Suns have hit nine home runs (against seven different pitchers) in the four games of this series, after hitting just four in the first 15 meetings of the year against the BayBears.
Brent Clevlen accounted for the lone BayBears run with a solo home run in the home half of the fourth inning of off Suns starter Brian Flynn.
With reliever Eric Smith on the mound for the BayBears in the eighth, the Suns batted around to double the lead.  Chris Gutierrez led off with a double, Paul Gran singled, and Kyle Skipworth walked to load the bases.  Donnie Webb cashed in with a double to the gap in left-center, driving in both Gutierrez and Gran to pad the lead to 6-1.  Webb is now 2-for-4 this season with the bases loaded.  Ben Lasater followed with a single to drive in two more runs to make the score 8-1.  The Suns added a run in the ninth when Kyle Skipworth hit a flyball to left field, Wladimir Sutil was unable to make the catch, allowing Gran to score from second base for the 9-1 final.
Paul Gran went 2-for-5 and scored two runs.  Ben Lasater  finished with two hits and drove in two runs.  Kyle Skipworth reached base four times and scored three runs.  He hit a home run, was hit by a pitch, walked, and reached on an error.
The Suns have won five of their last seven games, and 12 of the last 17.  The BayBears had their first sub-.500 month of the season by finishing 10-18 in July.  Mobile has just three wins in the last 14 games, a stretch that includes a season-high seven game losing streak.  In the series, the BayBears are 7-for-34 with runners in scoring position, and have left the bases loaded four times.
Suns lefty Brian Flynn (1-0) allowed one run on three hits over six innings to earn his first win with the Suns.  Two of the three hits he surrendered were infield singles.  Chase Anderson (3-3) gave up four runs on two hits in his five innings of work in the loss.  Anderson, a Southern League All-Star, entered the game with only three home runs allowed in his previous 15 starts, but both of the hits he surrendered to the Suns on Wednesday were home runs.
The Suns look to win the series on Thursday with the first pitch scheduled for 8:05 PM from Hank Aaron Stadium.  LHP Jose Alvarez (4-5, 3.95) will take the mound for the Suns.  LHP David Holmberg (2-4, 4.63) will start for the BayBears.