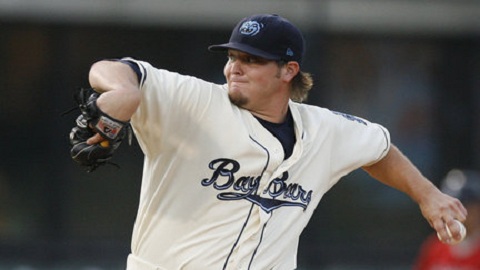 The top four in the Suns batting order drove in every run, and Jacksonville collected 13 hits against Mobile pitching in an 11-5 win over the BayBears at the Baseball Grounds of Jacksonville August 10, 2012. Photo Courtesy: Mobile BayBears

The Jacksonville Suns scored eight unanswered runs in an 11-5 win over the Mobile BayBears on Friday afternoon at the Baseball Grounds.  The Suns have won two of the first three games of the series, and improved to 18-10 at home in the second half of the season.
Danny Pertusati gave the Suns a 2-0 lead in the first inning with a two-run home run off of BayBears starter Brett Lorin.  The Suns improved to 46-18 when scoring the first run of the game.  Mobile took the lead 3-2 in the top half of the second with a two-out rally, with Brett Lorin driving in two of the runs with a single to center and Wladimir Sutil driving in another with his 14th double of the season.  The Suns tied game 3-3 in the bottom of the second, when Alfredo Lopez walked and scored on Jake Smolinski’s single up the middle.
Mobile took a 5-3 advantage in the top of the third, but that would be all the offense the BayBears could generate.  The Suns scored three runs in the bottom of the fourth to take the lead 6-5.  Pertusati provided the big hit with a two-run triple.  Jacksonville tacked on another run in the sixth inning to make the score 7-5, and put the game away with a four-run eighth inning for the 11-5 final.  The Suns have scored 10 or more runs in a game eight times this season and twice in the last dozen games
Danny Pertusati went 3-for-4 with two home runs and five RBI’s, one shy of Kyle Skipworth’s season-high of six RBI’s May 26th at Chattanooga.   Pertusati has hit all four of his home runs against the BayBears.  Ben Lasater finished 4-for-5 with a RBI.  Zach Cox drove in three runs, and Jake Smolinski reached base three times and scored twice.  The top four players in the Suns batting order combined to go 10-for-15 with 10 RBI’s and seven runs scored.  After collecting 12 singles in the first two games, the Suns finished with five extra-base hits in the game (2 doubles, 2 home runs, and a triple).
Bryan Evans (5-6) allowed five runs on five hits over five innings to win his third straight decision.  Brett Lorin (3-8) surrendered six runs on eight hits in four innings to drop his third straight game.
Game four of the series is Saturday night with the first pitch scheduled for 7:05 p.m.  LHP Brian Flynn (2-0, 4.08) will take the mound for the Suns in search of his third straight win.  RHP Chase Anderson (3-3, 2.62) gets the call for the BayBears.