Suns Stun Biscuits 9-6; One Game Out Of First Place 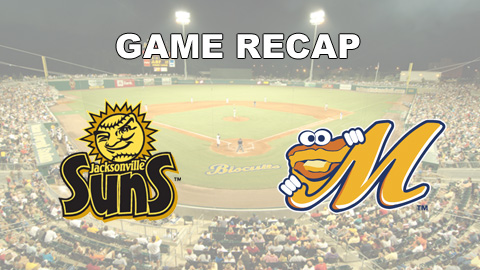 The Jacksonville Suns scored seven unanswered runs in a 9-6 victory over the Montgomery Biscuits on Saturday night at Riverwalk Stadium.  The Suns have won the first two games of the five-game series to trim the Biscuits lead in the South Division to just one game.

The Suns dented the scoreboard in the first inning against Biscuits starter Shane Dyer.  Chris Gutierrez singled and scored when Zack Cox doubled to left field to put the Suns up 1-0.  The Suns improved to 49-22 when scoring the first run of the game.

Montgomery stormed back in the home half of the first against Suns pitcher Matthew Neil.  The first three batters of the inning each singled, with Derek Dietrich driving in Ty Morrison to tie the game at 1-1.  A throwing error by Jose Duarte allowed Shawn O’Malley to score to give the Biscuits the edge 2-1.  Ryan Garko then lifted a sacrifice fly to left, with Dietrich coasting across the plate for a 3-1 Biscuits lead.

The Suns got one back in the top of the second.  Kyle Jensen led off with a walk, and Jose Duarte singled to put runners on first and third.  Alfredo Lopez delivered with a RBI single, with Jensen scoring to cut the lead to 3-2.  Lopez would finish the night 3-for-3 with four runs batted in.  Suns second basemen have thrived ninth in the batting order in the last two weeks.  The four RBI’s by Lopez are the most by a Suns number nine hitter a game this season.  Dallas Poulk was playing second base and batting ninth when he drove in three runs August 19th against Birmingham.

The Biscuits scored three more runs on three hits in the bottom of the second off of Neil to take command with a 6-2 lead.  Mikie Mahtook drove in two runs with a double, and Ryan Garko plated another with a sacrifice fly.  Montgomery collected eight hits in the first two innings, then just three singles in the last seven.

The Suns solved Shane Dyer and pulled even in the third.  Kyle Skipworth drove in two runs in the inning with his 16th double of the season to cut the lead to 6-4.  Kyle Jensen scored on a wild pitch to make the score 6-5, and Alfredo Lopez knocked in a run with a single to even the score 6-6.

Jacksonville scored three runs in the eighth inning with a two-out rally to take a 9-6 lead.  Lopez drove in two runs with a seeing-eye single up the middle, and Jake Smolinski drove in a run with his 23rd double of the season.  The Suns finished with a season-high 16 hits and tied their season-high for doubles in a game with seven.  Jacksonville had at least one base runner in every inning except the fourth, and every player in the Suns lineup reached base at least once in the game. Paul Gran was the only Suns player without a hit, but he reached base when he was hit by a pitch for a league-leading 18th time this season.

The Suns had six players record a multi-hit game.  Alfredo Lopez and Jose Duarte each finished with three hits.  Chris Gutierrez, Zack Cox, Kyle Skipworth, and Kyle Jensen each collected two hits in the game.  Lopez drove in four to double his RBI total to eight.  Skipworth drove in a pair of runs and now has 59 RBI’s this season.  Ty Morrison went 3-for-3 and scored two runs for the Biscuits.  Ryan Garko and Mikie Mahtook each drove in a pair of runs for Montgomery.

The Suns have won six of their last seven games, outscoring opponents 50-33.  Jacksonville improved to 21-14 when using the designated hitter.  After dropping nine of the first 12 games in the season series to the Biscuits, the Suns have won eight straight over their division rival by a combined score of 44-18 with three shutouts.  The Suns are a win away from claiming a series for the first time in three trips to Riverwalk Stadium this season.

The Suns bullpen combined to pitch 7.1 scoreless innings.  Edgar Olmos allowed just two singles in 3.1 innings after taking over for Neil in the second inning.  Grant Dayton (2-0) tossed three hitless innings for the Suns in the win.  Chris Rearick (2-1) allowed three runs on five hits over two innings in the loss.  A.J. Ramos pitched the ninth to earn his 20th save of the season.