The Suns return to the field and share the excitement of professional baseball with fans to kick off the 2012 season.  The Suns begin their regular season on Thursday, April 5, with a 50th Anniversary Golden Suns Coin Giveaway – the first 3,000 fans receive a 50th Anniversary 1962-2012 Golden Suns Coin.  Fans can also receive a Magnet Schedule and Poster Schedule on Friday, April 6 and the first 1,000 kids receive Fielder’s Gloves on Saturday, April 7 and Suns Silly Bandz to ALL KIDS on Sunday, April 8.

The Baseball Grounds will again host a number of great entertainment acts this season, including classic fan favorites and new performances.  Miami Marlins mascot Billy the Marlin returns to Jacksonville to help Southpaw celebrate his birthday on Sunday, May 6, when ALL KIDS can also receive a special Color-Me Magnet.  The ZOOperstars make three appearances with their kooky characters on Sunday, April 29; Saturday, August 11 and Sunday August 12, while BirdZerk goes berserk with a performance on Friday, June 1.  Breakin’ BBoy McCoy will bring his in-game dancing back to the park on Sunday, August 5. The Suns also host two Bark in the Park After Dark on Saturday, April 7 and Tuesday, May 29 and two Dog Daze of Summer on Sunday, July 1 and Wednesday, August 22.

The Suns have put together another great bobblehead series giveaway this season.  Mike Stanton will lead things off on Saturday, May 19; Alex Rodriquez next on Saturday, June 23; Shane Victorino on Saturday,July 21 and Larry Walker on Saturday, August 4.

The Suns will also have two former Atlanta Braves player appearances on Thursday, July 19 with John Rocker and Friday, July 20 with Dale Murphy!

The Suns have three Jersey Auction Nights for the 2012 season.  The first will be held on Tuesday, July 3 as the Suns sport a special Patriotic Jersey, then on Saturday, July 21 the Suns will wear a Buffet Style Jersey and finally on Saturday, August 4 the Suns will don the 1987 Jacksonville Expos Blue Jersey.

The Suns will once again share holidays throughout the season as the Suns pay tribute to military service members past and present on Memorial Day Monday, May 28. The holidays continue as we honor our country and Mr. Bragan’s 89th Birthday with a giant fireworks display on Independence Day, Tuesday, July 3.  The Suns will also have the traditional Christmas in August on Friday, August 10.

The Suns’ traditional weekly promotions return for the 2012 season, including Fifty Cent Family Feast Tuesdays, Businessperson’s Specials on Wednesday afternoons, Thursday Night Throwdown, Friday Family Fireworks, and postgame Kids Run the Bases on Sundays.  On Saturday Night the Suns bring back Steak Me Out to the Ballgame for $25, which includes a tender 8 oz. bacon-wrapped filet mignon, baked potato, salad, non-alcoholic beverage and General Admission ticket. Following the success of the past three seasons, Monday evening games are Belly Buster Mondays, where $20 gets fans a Homeplate Box seat along with all-you-can-eat hot dogs, hamburgers, popcorn, ice cream treats and soft drinks.

The Jacksonville Suns are the Double-A Affiliate of the Miami Marlins and are proud members of the Southern League of Professional Baseball Clubs.  The Suns begin the season on Thursday, April 5 against the Huntsville Stars.

It’s Not The Destination, It’s The Journey

From 1985 through 1990 baseball in Jacksonville was affiliated with the Montreal Expos.  A partnership that shaped talent for the future and produced wins in the present.  Including 1970, Expos teams made trips to the playoffs in four of seven seasons in Jacksonville with two division titles.  Those teams of the 80’s gave everyone a look at many future big league players up close and personal, lasting memories to be taken away from Wolfson Park.   One team in particular, the 1987 Jacksonville Expos took the city on a memorable summer ride chasing dreams and a championship.

The Expos gave opposing pitchers nightmares throughout the season, pushing a total of 670 runs across the plate.  Manager Thomas Thompson relied on an explosive offense led by the talented duo of Mike Berger and Nelson Santovenia.  The two combined for 41 home runs and drove in 156 runs.  A native of Pittsburgh, Berger was drafted by the Pirates in the fourth round of the 1980 draft by his hometown team.  In his first of two seasons in Jacksonville he put together a career year.  He was tops on the club with a .293 average, and his 93 runs batted in were 10 more than his nearest teammate.  He also paced the Expos by scoring 94 runs.

Santovenia attended the University of Miami, and was drafted by Montreal with the 19th overall pick in the 1982 amateur draft.  He broke out at the plate in his fourth season in Jacksonville in 1987 batting .279 with 19 home runs.  His 63 runs driven in were third most on the team.   The Expos catcher appeared in 117 games, the most that he would play in any single season in 12 years in the minors.  Santovenia would go on to play 297 games in parts of seven seasons with Montreal, Kansas City, and the Chicago White Sox.

Of the 670 runs that the Jacksonville Expos scored during the 1987 campaign, the one-two punch of Berger and Santovenia accounted for 306, either with their bat or their base running.

Esteban Beltre, Andy Lawrence, George Wright, and Armando Moreno also chipped it at the plate.  The four combined to drive in 214 runs.  Lawrence led the team with 25 double and his 76 runs batted in were third most on the team.

The enthusiasm of a young superstar in the making is always a welcome addition to any roster, and the Expos were no exception.  Signed in 1984 by Montreal as a free agent, Larry Walker arrived for his one and only season in Jacksonville in 1987 and gave his teammates and fans a glimpse of what the future had in store.  A dazzling combination of power and speed!  In 128 games the outfielder hit .287, had 26 home runs, drove in 83 runs, and he scored 91 times.   Walker stole 24 bases and was thrown out only three times.  And defensively the outfielder used his powerful left arm to keep opposing base runners in check.

To say that athletes are superstitious bunch would be an understatement.  Larry Walker was no exception.   He might not have blinked an eye at a broken mirror or a black cat.  He didn’t seem to need the luck of a wishbone or a four leaf clover.  But there was “the number three”.   He wore number 33.  Honus Wagner and Eddie Murray wore 33 during their playing careers and they punched their ticket to the Hall of Fame.  Will there be another member of the hall to have worn that number?  Walker would also take 3 practice swings before he would hit, or multiples of three during each plate appearance.   Far from being a human rain delay.  For the 1987 Jacksonville Expos “three” was a charm!  Walker, Berger, and Santovenia .  They combined for 53 homers and drove in 239 runs.  The trio also scored 241 of the team’s 670 runs during the season.

A native of Maple Ridge, British Columbia Walker grew up playing hockey and had a dream of a career in the NHL as a goalie.  He only played baseball in the summer for fun.  We are lucky he chose baseball, and in that 1987 season in Jacksonville a 20 year old from the north gave the Southern League chills.  Walker made his major league debut with Montreal August 16, 1989, and is one of only 230 major league players from Canada and is in the Canadian Baseball Hall of Fame.

Walker played 17 seasons in the big leagues.  He’s a career.313 hitter and his 383 home runs rank him 58th on the all-time list.  He was a five-time all-star, won the National League batting title three times, and in 1997 in the “Mile High City” he was the NL home run champ with 49 while playing for the Rockies.  Rare air indeed!   By the way, his trophy case also includes seven gold glove awards, three silver slugger awards, and the 1998 “ESPY” for baseball player of the year.

While the offense did its part, the Southern League found out quickly that it would be tough to score against Jacksonville in 1987.  A total of 21 pitchers would appear in an Expos uniform during the season, and the 3.68 team ERA ranked second in the league at season’s end.

Right hander John Trautwein played two seasons in Jacksonville and was the set-up man in 1987.  And he set his team up for success going 15-4 in 56 appearances.  His 15 wins were most in the league that year, and the most he would have in any one season in his career.  He would go on to play nine games for the Red Sox in 1988.

Righty Kevin Price played parts of three seasons in a Jacksonville jersey.  He appeared in 57 games in 1987 with a 9-4 record, and he led the league with 19 saves.

After leading the league with a 2.50 ERA, another right hander Brian Holman was named the Southern League’s Most Outstanding Pitcher.  He started 22 games and won 14 of them.  Holman finished the 1987 season with 115 strikeouts, second-most on the team.  He would go on to play four seasons in the majors with Montreal and Seattle. 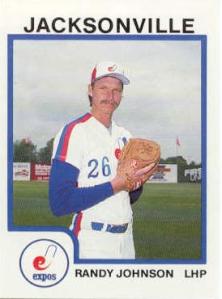 Jacksonville hurlers led the league with 976 strikeouts during the 1987 campaign.  Randy Johnson didn’t have a nickname when he played in Jacksonville.  It was given to him a year later by Montreal teammate Tim Raines.  Johnson possessed one of the most dominant fastballs and sliders in the game, and nickname or not he totaled a league-high 163 strikeouts in 140 innings of work.  His lack of control early in his career only helped to intimidate any player who might have had the thought of getting too comfortable at the plate.  He’s still the major league leader when it comes to hitting batters. He hit 190 batter, AND one bird in a spring training game in 2001.  Of the 190 hit batters, Johnson hit Larry Walker three times in his career. Maybe there IS something to be said for Larry’s concern for the number three!

Johnson would go on to win five Cy Young Awards, second only to Roger Clemens’ seven.  He’s second on the all-time strikeouts list with 4,875, trailing only Nolan Ryan.  “The Ryan Express” struck out 5,714 batters in his career.  With nicknames like “The Big Unit” and the “Ryan Express” you know these players were going to deliver.

The Expos were led by skipper Thomas Thompson, who managed Jacksonville for four season from 1985-’88.  Overall he spent 18 seasons grooming talent at various levels from class-A to Triple-A.  The 85 wins by his 1987 squad are the third highest win total in a season in Jacksonville history, and the most wins Thompson would have in a single season as a manager.  The Expos didn’t win the title, but Thompson was Southern League Manager of the Year, and since 1970 his 302 career victories rank second on Jacksonville’s all-time wins list, trailing only John Shoemaker.

The Jacksonville Expos finished the 1987 season with a record of 85-59 winning the regular season in the East division by just a half game over the Charlotte O’s.  In the divisional playoffs the Expos fell short against Charlotte, losing the best of five series three-games-to-two.  The Birmingham Barons from the West division would get hot at the right time, losing just one playoff game in route to the Southern League Championship after winning just 68 games during the regular season.

Even though the summer of 1987 ended without a league championship, the nearly 200-thousand fans that came out to see the Expos  had the chance to get a glimpse of 27 players  that would find their way to the major leagues.  Some of those players might even find their way to Cooperstown.