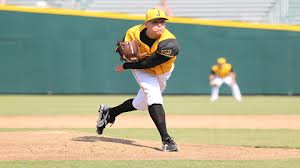 Graham Taylor(above)allowed six hits in his final start of the season.  Jacksonville fell 3-2 to the Jackson Generals in six innings at Pringles Park.

The Jacksonville Suns quest for a playoff birth in the second half of the season came to an end on Saturday night, with a 3-2 loss to the Jackson Generals in a six inning rain-shortened game at Pringles Park.  The loss, combined with the Biscuits 11-4 win over the Stars, eliminated the Suns from playoff contention and vaulted Montgomery to the South Division title in the second half.
After waiting through a 23 minute rain delay prior to the first pitch, the Suns jumped out to a 1-0 lead in the second inning when Paul Gran hit his fifth home run of the season, a solo blast to left field off of Generals starting pitcher Anthony Fernandez.  It was Gran’s first home run since July 7th.  The Suns have scored the first run in all three games in the series, but have lost all three to fall to 51-25 when crossing the plate first.
The Generals used the long ball to even the score in the home half of the second inning against Suns lefty Graham Taylor.  Kalian Sams belted his 11th round tripper of the season, a solo shot to left field to tie the game 1-1.
Jackson took the lead for good in the bottom of the third inning when Brad Miller doubled to right field, and Stefen Romero followed with a two-run blast to left-center to make the score 3-1.  Taylor has allowed 18 home runs this season, tied for the most in the Southern League.  The Generals lead the league with 114 home runs, and have had 13 multi-homer games in their last 45 contests.

In the fifth inning Jake Smolinski led off the inning with his league-leading 78th walk, and Chris Gutierrez singled to put runners on the corners with no outs.  The Generals then summoned Moises Hernandez from the bullpen.  With one out, Kyle Jensen lifted a sacrifice fly to center with Smolinski cruising home to cut the Generals lead to 3-2.

The teams continued to play knowing that severe weather was on the way.  Play was then stopped after Taylor struck out Leury Bonilla to end the sixth inning, and after a delay of 1 hour and 22 minutes due to heavy rain, lightning, and strong wind, the game was ruled complete with Jackson declared the winner.

The Suns have just four wins in their last 14 road games, and fell to 13-20 away from home in the second half.  The Generals continued to improve on the best home record in the league at 44-24, and Jackson has won six straight and 11 of their last 13 games at Pringles Park.

Jose Duarte finished 2-for-2 with a pair of singles for his fifth multi-hit game of the season for the Suns.  Jacksonville left eight runners on base over six innings.  Mike Zunino and Stefen Romero each finished with two hits for the Generals.  Zunino has hit safely in 10 of his first 13 games with Jackson.  Romero has hit safely in 19 of his last 20 games, with eight multi-hit games and six home runs.  He has belted a two-run home run in each of the last two games against the Suns.

Graham Taylor (9-11) allowed three runs on six hits and struck out five over six innings of work.  Taylor finished the season 6-5 at the Baseball Grounds of Jacksonville, and 3-6 on the road.  Moises Hernandez (5-2) tossed two hitless innings for the victory.  He’s the older brother of Mariners pitcher Felix Hernandez.