Blue Wahoos Cruise Past The Suns

The Pensacola Blue Wahoos downed the Jacksonville Suns for the second straight game with an 8-2 win on Friday night at the Baseball Grounds.

For the second time in as many nights Henry Rodriguez and Joel Guzman led the Blue Wahoos at the plate.  After combining for eight hits the previous night, the duo were at it again in this one.  Rodriguez led off the fourth inning with a single, and Guzman followed by hitting his third home run of the season to give the visitors a 2-0 lead for a second straight night.  It was just the second home run that Zach Neal has surrendered this year in his four starts.  The Suns dropped to 1-10 when they allow their opponent to score first, while the Wahoos are now 9-4 when they score the first run.

In the fifth inning, Ryan LaMarre doubled to left and came in to score Pensacola’s third run on a single by Rodriguez.  LaMarre finished the night 2-for-4, scored two runs, and drove in another.

The Blue Wahoos sent 11 hitters to the plate and exploded for five runs in the top of the seventh against reliever Garrett Parcell and built an 8-0 lead.  Yordanys Perez drove in two runs in the inning with one of the Blue Wahoos five doubles in the game.  Ryan LaMarre, Josh Fellhauer, and Miguel Rojas also each drove in a run in the inning.  Six straight Pensacola batters reached base in the seventh, including a pair of intentional walks.

The Suns scored their first run of the night in the seventh, when Kyle Jensen walked to lead off the inning, and scored when Donnie Webb doubled.  Webb was thrown out on a close play at third.  Jensen also hit his third home run of the season in the ninth inning.

Seven players had two hits for Pensacola as the Blue Wahoos hammered out 14 hits in the game.  Yordanys Perez and Joel Guzman each drove in two runs on the night.  In the first three games of the series, the Wahoos have scored 22 runs on 36 hits.  After having just one extra base hit and 11 singles in the second game of the series, Pensacola had five doubles and a home run in Friday’s game.

Jensen was 1-for-3 with two runs scored and he also drove in a run.  Donnie Webb was 2-for-4 with a run batted in.  Webb is 5-for-11 in the last three games.  Daniel Corcino allowed just three hits in five and a-third innings to even his record at 2-2.  Zach Neal allowed 10 hits and three runs in his six innings of work and is now 2-2 on the season.

The Blue Wahoos collected a dozen hits in route to a win over the Suns at the Baseball Grounds of Jacksonville. Photo Courtesy: Jacksonville Suns

The Pensacola Blue Wahoos topped the Jacksonville Suns 9-3 on Thursday night at the Baseball Grounds.  The win snapped the Suns five-game winning streak over the Wahoos.

Pensacola jumped out to a lead in the first inning when Ryan LaMarre and Henry Rodriguez both singled, and with one out Joel Guzman doubled to left to drive in the first run.  A batter later it was 2-0 when Rodriguez scored on Brodie Greene’s ground out.  It was a tough first inning for Suns starter Bryan Evans.  He allowed three hits, two runs, and walked a batter.

In the bottom of the inning Jacksonville cut the lead in half when Ryan Patterson singled, stole second, and scored on a throwing error by Pensacola catcher Mark Fleury.  The Suns took the lead in the third inning when Patterson and Kyle Skipworth both walked and came around to score when Russell Mitchell doubled into left to give Jacksonville a 3-2 advantage.  Patterson has scored four runs in the last two games.

That Blue Wahoos scored the next seven runs in the game.  Pensacola sent nine men to the plate in the fourth and scored three runs to take a 5-3 lead.  Josh Fellhauer, Mark Fleury, and Mark Serrano all walked and scored in the inning.  In the game, the Wahoos drew eight walks and five of them came around to score.

Pensacola scored two more in the sixth and seventh innings to build a 9-3 lead.  Joel Guzman finished 4-for-5 and drove in three runs.  Henry Rodriguez went 4-for-5, scored two runs and drove in another.  11 of the Blue Wahoos 12 hits in the game were singles.

The Suns were held to four hits in the game.  Russell Mitchell drove in two of Jacksonville’s three runs, the other was unearned.  The Suns dropped to 1-9 this season when allowing the game’s first run.

Bryan Evans dropped to 0-2.  He pitched three and two-thirds innings, allowing five hits and five runs but only two were earned.  Evans walked five and struck out two.  The winning pitcher was Mark Serrano.  He tossed three scoreless innings to improve to 2-0.

Blue Wahoos Walk Away With 2-1 Win Over Suns 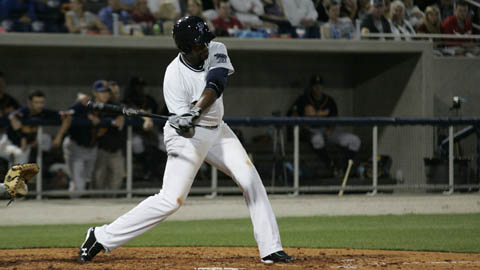 Joel Guzman walks with the bases loaded in the 9th inning to give the Blus Wahoos a 2-1 win. Photo Courtesy: Pensacola Blue Wahoos

In the first-ever meeting between Jacksonville and Pensacola, the game was decided in the ninth inning with the Blue Wahoos winning 2-1 over the Suns
With the bases loaded in the home half of the ninth and two outs, clean up hitter Joel Guzman stepped to the plate to face Suns relief pitcher A.J. Ramos.   Guzman played in Jacksonville and was part of the 2005 Championship and led the Suns in home runs and RBI’s that year, but on Sunday with the game on the line he never swung the bat and walked on four pitches to force in the game-winning run.
In the fifth inning the Blue Wahoos took a 1-0 lead when Henry Rodriguez hit a home run over the left field wall off of Suns pitcher Bobby Bramhall.  A blast that left the park in spite of a strong wind blowing in from that direction.  Rodriguez hit the first-ever home run in Pensacola history on Opening Day against Montgomery.
The Suns tied the game 1-1 in the top of the sixth when Kyle Skipworth led off the inning with a double to the wall in right field.  After advancing to third on a wild pitch, Skipworth came in to score on a single by Jeff Dominguez.  Skipworth finished the day 1-for-3 and now has a hit in each of his last three games in the starting lineup.  Dominguez went 1-for-4 and Jake Smolinski finished 2-for-4.  Smolinski led off the game with a double for the second straight day.
Last season Jacksonville won 36 road games, fourth-most in the Southern League.  Only Chattanooga(41), Tennessee(39), and Mobile(37) had more wins away from home.
The three combined runs were the fewest in a game in the brief history of Maritime Park.  With the loss Jacksonville drops to 4-7, while Pensacola improves to 7-4 with the victory.  The Blue Wahoos have been outscored 25-24 in their six home games this season, but have won five times.
Pedro Villarreal started for Pensacola and pitched six innings, allowing five hits and just one run.  It was the second straight start that Villarreal allowed just one run and didn’t record the win.  Donnie Joseph earned his second win of the season, pitching two innings of scoreless baseball.  He hasn’t allowed a run in five appearance this season.  Edgar Olmos made his Double-A debut for the Suns.  He pitched four innings and allowed just one hit.  Olmos struck out one and walked eight Blue Wahoos batters.  Wade Korpi suffered his first loss of the season.  He pitched one and two-thirds innings, allowing three singles, and left the game with the bases loaded in the ninth.
The Suns are 0-6 this season when they allow the first run, the Blue Wahoos are 5-1 when they cross the plate first.  Both teams combined to go 2-for-15 with runners in scoring position, and also combined to strand 19 base runners with Pensacola leaving a dozen on base.
Game two of the series is Monday with a match up of right-handers. Bryan Evans is scheduled to take the mound for Jacksonville against Pensacola’s Curtis Partch.